Welcome to My New Blog!

Grieving Invisible Losses In the Time of COVID 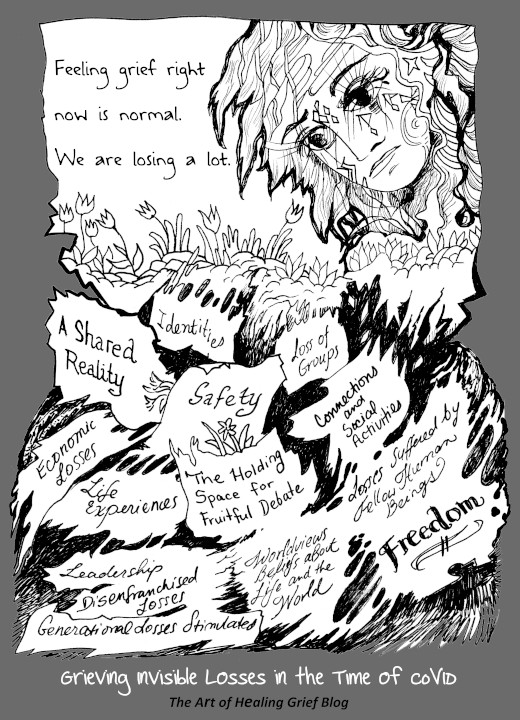 Grief: The Digestion of Change

Grief can begin with a feeling of having been socked in the gut, suddenly unable to breathe. For a time, you hold the impact in your stomach like a lump of indigestible food waiting to be processed. Sometimes the feeling rises up and forms a lump in your throat, a holding zone for all the words as yet unspoken: “But I love you.” “This makes no sense.” “Why is the world this way?” You watch as whatever you lost leaves you. You sit down in a heap on the floor. You are dismantled. You mourn. And you begin the long work of reformulating yourself to live as a new you in a new world.

But what if the thing you lost leaves silently, invisibly? One day it just slips out the door while you’re busy doing other things. And what if it’s not a person or a treasured possession, but is rather, a part of the world around you? A way you’ve grown accustomed to relating with others? Crucial, familiar threads of the fabric of the contexts that hold you together as you create yourself and your life?

There is still an ache in your gut but it is very slow to form, as if whatever is kicking you in your stomach is taking many days to do so. There is still a lump in your throat, but it’s very subtle and you don’t detect it. You don’t understand the heavy weight you carry in your arms now, on your shoulders, in your heart. You don’t know that it is the indigestible food, the unspoken words, the heaviness of the huge pile of layers of the grief of many losses. You have not identified the ways grief is living within your body.

You are not watching consciously, but there is a set of invisible eyes within your unconscious mind that is watching all the things fall away from your life, your world, your relationships, and is whispering to your body about them. You are the ground for grief’s invitation, the sacred receptacle for grief’s unwelcome alchemy. You are at the precipice of the cauldron of grief’s transformative potential. However, you are still looking away from the grief you are walking with.

But what you lost, you lost. And the process is the same: To sit down in a heap on the floor. To be dismantled. To mourn. To begin the long work of reformulating yourself to live as a new you in a new world.

But before you can embark on the grief journey, the things that you lost need to be named.

Naming involves bringing to conscious mind something that has been buried, repressed or simply overlooked, but which actually contains charged emotions. You can name a past trauma or loss that you had forgotten about, a Part of the Self like the Inner Child who at a certain age is grieving but you were not aware was carrying grief, or current losses that are going on but that you have not been paying attention to.

When you Name something, this separates it out of the many unidentifiable clouds and mists of emotion – the mass, the combination of the emotions that are held in the system, the blob of sensations always changing and shifting. Sometimes, that one identification can begin creating numerous connections and catalyze realizations about one’s life, relationships, past, and patterns. By Naming something that you are grieving, you open one small pocket of grief and welcome it to fully feel and express its grief. Then this begins, step by step, to open up more pockets of grief that never have seen the light of day. Sometimes Naming is the initiation point, the opening of the doors of a long-term emotional processing project that spans months.

What have we lost, with this pandemic? What are we losing that we are not looking at? What losses can we Name? Can we allow the practice of Naming to initiate the emotional processing of buried grief?

We all have different variations; nobody is experiencing the same losses. From my personal experience, overall, I see the following losses happening:

14 Types of Losses During Coronovirus Pandemic

Since the election of Trump in 2016, the US has largely migrated into two different camps. We have broken into factions based on perception, paradigms and philosophies. Friends and family members have been lost to the other camp. The walls of division grow more cemented every day. Even simple conversations can bring up a subtle feeling of loss and alienation as someone you care about speaks from a different reality than you are in.

Naming Some Losses of A Shared Reality

Many of us already lived in realities with some degree of ongoing trauma and threat. But on the collective level, reality has become more dangerous and more traumatizing in a number of ways than it was before.

Naming Some Losses of Safety

3. The Holding Space for Fruitful Debate

Safe Containers for tough conversations. Where are they? Safe spaces for people to freely speak about their thoughts and feelings seem to be largely dissolving away in the arena of public debate as well as between friends and family.

Naming Some Losses related to The Holding Space for Fruitful Debate

Due to social distancing and / or having different ideas, we cannot connect with others in many ways we used to. Lock-downs vary by region but even if the lock-downs were in our past we lost something due to being isolated during that time period.,

Naming Some Losses of Connections and Social Activities

Many are facing financial losses.

For any whose business has closed or who has lost a job, there is the accompanying loss of an identity linked to that job position; for any who has switched their political identity, this constitutes a loss of the previous identity.

Naming Some Losses of Identities

Lost normal experiences due to restrictions put in place due to the pandemic. Loss of milestones others in one’s culture typically would pass through at that age, such as missing a ceremony such as a graduation. Children who go to school wearing masks are losing the experience of seeing the facial expressions of their peers. If one lost their business they could have lost a lifelong dream. There could be lost opportunities, achievements, projects, contributions that had been planned but could not be executed do to restrictions put in place due to Covid-19.

Naming Some Losses of Life Experiences

I believe that we do grieve collective losses and losses others experience that we witness.

Naming Some Losses Suffered by Fellow Human Beings and Humanity

Many people lost their place in groups they used to be part of or be affiliated with.

Naming Some Losses of Groups

10. Worldviews, Beliefs about Life and the World

Loss of any belief or assumption about how our reality works or how other people are.

Naming Some Losses of Worldviews & Beliefs

This was eroding already, but now it is apparent to many that there is little to no leadership that is trustworthy. Loss of good leadership. Loss of faith in leadership. Many have also lost respect for the Law and those who create the laws.

Naming Some Losses of Leadership

With such things as mandates, lockdowns, threats of vaxx passports, travel restrictions etc. we are losing many freedoms.

Naming Some Losses of Freedom

Losses that are invisible, negated or disenfranchised.

Naming Some Disenfranchised and Negated Losses

14. Generational Losses can be Stimulated

Losses endured by our ancestors, losses distant relatives experienced way back in the family tree, and losses experienced by our race or religion may be brought up to the surface.

Naming Some Generational Losses that can be Stimulated

How many of these losses are you experiencing? Can you Name some of them?

Acknowledging – Naming – each and every loss opens up the pathway of grief; it starts the digestive juices flowing to tackle the digestion of the indigestible food being held within; it begins the purging, the flow, of all the emotions. It asks us to speak all our unspoken words of sorrow, rage, protest, surrender. Naming and placing attention on what is being lost asks us to metabolize the shifts happening in our external reality not just in our minds but also in our bodies.

Acknowledge the grieving part that is enduring the losses you Named. Be present with them for a few moments. Be here for that part if it wants to express any feelings.

Grief is the physical, emotional and mental digestion of destructive change.

Grief is a complex undertaking, a path of deep transformation and adaptation.

Grief is the collection of heavy lumps of clay inside that need gentle molding, careful passing through hands, hands full of creativity and life.

Allowing grief its natural passage through heart, body and mind helps us to perceive and deal with things as they are.

Grief helps us slowly transform ourselves into that which can face a new world.

What will you become after you have grieved all that you have lost?

By the way, here is a good video about this topic of feeling the despair fully regarding what is happening right now:

Permanent link to this article: https://grief-help.com/grieving-invisible-losses-in-the-time-of-covid/

Your site doesn’t have any tags, so there’s nothing to display here at the moment.